5:50pm A bit of a crowd had gathered to watch day one of the shooting of the new Sony Bravia advert, but not as much as I had thought there might be given the publicity from the Evening Times yesterday. I wanted to get a wide view of all the explosives throwing paint up onto the tower block, so I mounted my camera on the tripod and remained quite far back. After chatting with some local kids (they wanted to look through the camera’s viewfinder), I decided I should really move in closer. 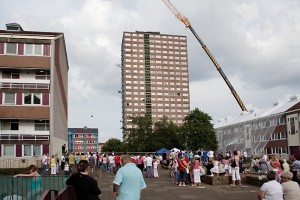 6:18pm This was the scene from closer in.

I had no idea what was going to be happening or when. And then I became unhappy with this position and decided to move. Of course, my heart was in my mouth as I moved further round – just in case they let rip while I was moving! 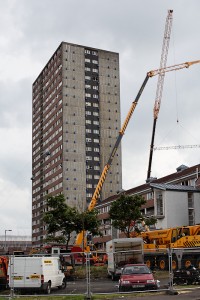 The high-rise, from the rear

6:30pm So, I ended up here. Nothing had been set off while I moved round, which was a big relief!

I’ve seen movie actors being interviewed and commenting that much of their time on-set is spent waiting in their trailer for a call to say that everything is finally ready for them. This was much the same. “Come on guys – I’m ready!”

Although you can’t see them in either this photo or the previous one, there were lots of crew on the other side of the fence seen here. They all wore high-visibility (bright yellow) waistcoats and hard hats. Many of them were in radio contact with the director and running about preparing things, while some were simply waiting patiently. I spent my time closely watching whichever ones were in view, trying to gauge from their actions when the show was going to begin. After several false alarms, it looked like we were finally ready… 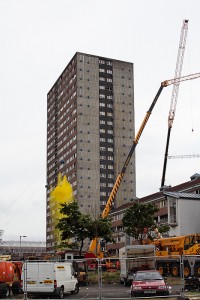 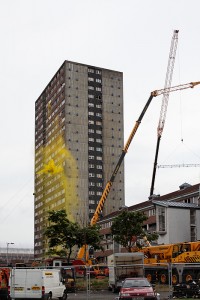 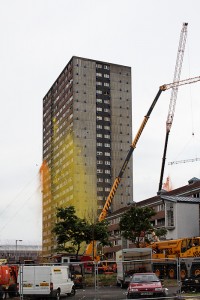 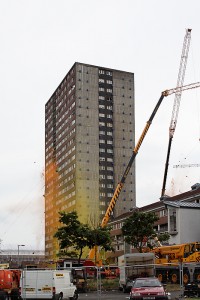 Finally, it all dies down

And, in about eight seconds, it was all over!

Eh? Was that it? So much for all the blue buckets I can see on the end of the tower block exploding. Harrumph!

Well, if that’s the excitement over for today, let’s wander back in the general direction of the car and see if I can get any other photos on the way… Perhaps I’ll spot Carol – if she’s still here… 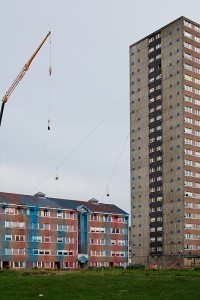 Low-rise flats, with red and blue paint from earlier

6:52pm Back around the other side, I can clearly see that there was activity earlier in the afternoon – the low rise block of flats has had alternating stripes of red and blue paint exploded over it. If you look closely, you can see barrels suspended just below the gutters. (I found out later that there had also been ground based explosions which came up to meet the gutter barrels.) 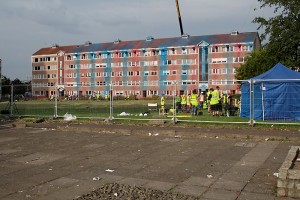 Crew, wrapping things up for the day

6:59pm Although the filming is now over for the day, we can see the crew are still working. Gear is being stowed away for the day. There’s no sign of Carol amongst them. By now, I’m about the only observer left around. 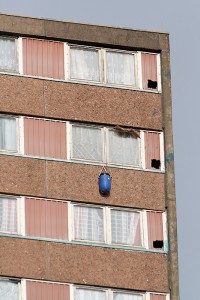 7:03pm I spotted a single barrel suspended at the top right corner of the main face of the high-rise block. I decided to fit my new zoom lens and try to grab it.

7:04pm A few seconds after I took this shot, I was approached by a local.

I mumbled something but he simply took a few steps back and posed for me. 😕 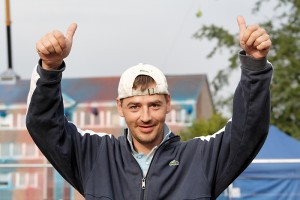 What he really wanted was for me to take his photograph! I think he might have thought I was with “the media”. You have no idea the relief when I realised this… 😳

I never had time to modify any of the camera settings – I simply framed the portrait and released the shutter. He thanked me and went on his way, fair chuffed with himself! 😀

The whole encounter was over in about a minute. I never did get his name. 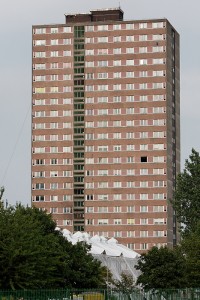 The main face of the high-rise block

7:10pm Finally, on my way back to the car, I glanced back and saw this alternative shot of the high-rise block. The empty window you can see here had a camera crew in it earlier, looking down on the shots I saw. You can also see solitary blue barrel shown earlier if you look closely. The white netting over the low-rise block in front is there to protect it from splatters – this block is still inhabited, unlike the low-rise seen earlier.

I wonder what tomorrow will bring?