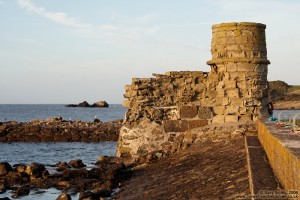 I would guess that once upon a time a beacon burned on top, to guide fishing boats safely back home…

[NB: click on any thumbnail image to see a larger version…]

This shot of the harbour from the air shows the same structure just right of centre, at the bottom. It also shows the castle in the upper right corner – and that’s where I hurried off to after completing this first shot… 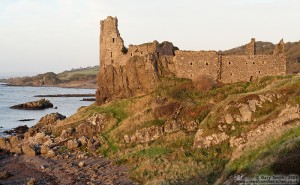 Setting sun on the ruins of Dunure Castle

This is the shot I came for! 😀

(For reference, the sun is setting somewhere over my left shoulder.) 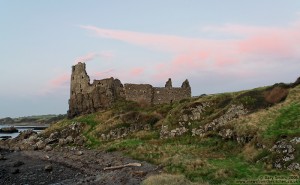 This final shot, on the right, was taken about 40 minutes later, from a position slightly further on from the previous shot. The sun had dropped below the horizon about ten minutes earlier, but had left an attractive pink glow in the clouds in the east.

If you already have some knowledge of the area, you may be waiting for me to recount the gruesome sixteenth century tale of the abduction and subsequent roasting on a spit in the castle’s Black Vault of Alan Stewart, the commendator of nearby Crossraguel Abbey, to make him sign over the title to lands held by the Abbey to Gilbert Kennedy, the fourth Earl of Cassillis – but since many other sites already tell the tale, I’ll simply link to this version which caught my eye. 🙂

2 Responses to Dunure at sunset