Although it doesn’t show here, the light was quite an orange/yellow light – but the white balance control in the camera neutralised it. I actually prefer this, so I didn’t bother trying to colour-correct it back. You can see something much closer to the “proper” colour in the other two shots lower down this page.

McCaig’s Folly from the inside

Returning to the car, I drove back down and parked on the waterfront. I walked round to the harbour and got the next two shots from the same position. 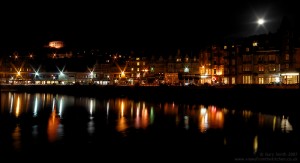 The floodlights which you can see in the final shot are along the front of the outer walkway I was on earlier. 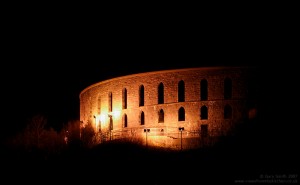 After returning my camera gear to the car, I had a wander around to try to find a hot snack before hitting the road. As a vegetarian, my choices are normally a bit more limited than most people find – I accept and expect that. I was really disappointed – I hadn’t expected a wide choice, but I found nothing suitable available. There were several places where I could probably have had a sit-in sit-down meal, but I wanted to get back on the road to get home. Fortunately, I had brought some “nibbles” with me, so I made do with that before heading off.

Footnote While I was writing up this page, I came across this full 360°panoramic shot taken inside the Folly during daylight hours. It’s really quite impressive. Note that you’ll require to have QuickTime installed for this to work.