This is from my May short break last year. I’d spent the last 90 minutes or so about three miles back along the road, pottering about at Loch Nan Uamh. The sun was setting and the light had been pretty good. However, all good things must end and I had to be back at the hotel (the Lochailort Inn) by 8pm to order my evening meal before the kitchen closed. I cut it close leaving Loch Nan Uamh, wanting to maximise my shooting time. As I drove towards the hotel, I could see that the clouds in the sky ahead of me were pretty dark. With the sun setting behind me and rain coming from in front I was suddenly presented with this marvellous rainbow. 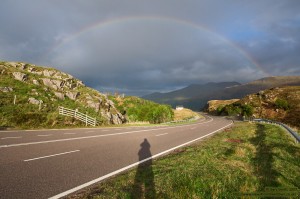 Dilemma! Do I risk missing dinner and stop and grab a shot of it (in the rain which had reached me by then) or just drive on? Okay – so that was easily answered! 🙂 But just a quick handheld shot – no tripod. The road was quiet, so I managed to stop easily. I grabbed the camera out the bag and, shielding it from the rain with my body, ran across the road. One quick test shot and then this one. Then back into the car and on my way.

[NB: click on the small image to see a larger version…]

You can see from the size of my shadow just how low in the sky the sun must have been. (It was a pity I didn’t have any time to try to set up the shot without my shadow featuring in it, but I really didn’t want to miss my meal!)

I reckon that this is pretty close to the location from which I made the shot.

The white building in the distance is “Our Lady of The Braes Roman Catholic Church”, also known as “Polnish Chapel”.  The outside of the church featured in the 1983 Bill Forsyth movie Local Hero many years ago.

For those of you who might be unfamiliar with the term, “The Road To The Isles” is the traditional name for the road – the A830 – which runs 43 miles from Fort William to Mallaig. Mallaig is a small, bustling port which is both the end of the road and a jumping-off point for various ferries to a number of the islands off the north-west coast of Scotland.

One Response to Rainbow Over The Road To The Isles