I visited the Benmore Botanic Garden at this time last year. It’s one of the regional gardens belonging to Royal Botanic Garden in Edinburgh and is located about seven miles north of Dunoon.  My friend Carol often visits the Edinburgh garden and suggested that we visit Benmore to get some photos of the autumn colours.

After spending the early part of the afternoon wandering around, we decided to head back towards the entrance to try to catch the setting sun in a particular area we’d passed earlier. Given the hilly nature of the surroundings, the sun disappears from the sky behind the neighbouring hills well before sunset, leaving many areas in shade. 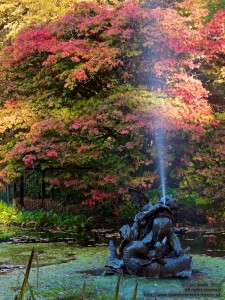 We were passing the pond and stopped to take some shots.  This one shows the fountain against some sun-dappled autumnal foliage.  (I’m afraid I’m not particularly botanically inclined, so you’ll just have to make up fancy tree names yourself.)  The bronze fountain is in the form of a boy with two dolphins and dates back to 1875.

[Click either of the small photos to see a larger version…]

Before leaving the garden, we stopped to take some photos in The Avenue at the entrance.  This is comprised of giant redwood trees which are normally found on the slopes of the Sierra Nevada mountain range in California.

Given their size, it’s difficult to photograph these huge trees, so I had to settle for this shot which merely suggests their size.

The Benmore specimens were planted in 1863.  Given that the oldest known specimens in the wild are of the order of about 3,500 years old, these Scottish cousins are mere babies.  Even so, at only about 150 years old they’ve reached heights of over 50 metres (that’s over 170 feet) tall.  The very tallest reach heights of over 90 m (300 ft) in the wild.