END_OF_DOCUMENT_TOKEN_TO_BE_REPLACED

Afternoon Sun on “The Matrix” 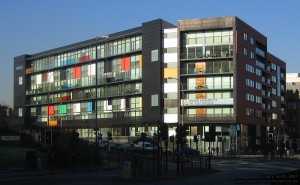 Over the past couple of days, the weather has been marvelous photography weather – crisp winter days with bright sun and clear, blue skies – and I’ve been stuck in the office, looking out. This residential block at Cowcaddens Road and Port Dundas Road, not far from where I work, is known as “The Matrix”. I had spotted that at lunchtime the sun illuminates the south-facing main side of this apartment block quite nicely, bringing out the colour in the various panels. I’m not a big fan of this building normally, but it’s not so bad when lit this way. 😛

[Click on the small photo to see a larger version…]

Posted in IXUS 40, Photographs, Scotland | Tagged Glasgow | Comments Off on Afternoon Sun on “The Matrix”

END_OF_DOCUMENT_TOKEN_TO_BE_REPLACED

I’ve been staying over in Edinburgh for a couple of days to allow me to attend a training course for work. This evening, after returning to my hotel and freshening up, I wandered up to Princes Street to take a look at the Winter Wonderland. I have already seen a number of shots from the event such as this one and this one, so I had a rough idea of what to expect. 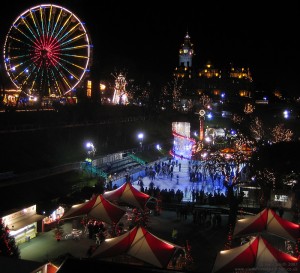 In the end, this is my favourite from the several shots I took.

For reference, Princes Street runs along the left of the shot (on the far side of the big wheel), while the train tracks into Waverley Station are just out of sight to the right. The photo was taken shortly before 8pm, from the back corner of the Royal Scottish Academy Building.

END_OF_DOCUMENT_TOKEN_TO_BE_REPLACED

The new Sony Bravia advert, which was filmed earlier this year in Glasgow, was finally due to be broadcast for the first time tonight.

I read somewhere that one of the reasons Glasgow was picked was due to the large amount of green spaces (parks, playing fields, etc) for which the city is renowned. We’re not referred to as the Dear Green Place for nothing. You’ll see from early scenes of the advert that there’s still a fair degree of truth in this, even in this day and age.

The advert itself was filmed in the leafy Glasgow suburb of Toryglen, which is now not only green but also red, orange, yellow, blue, purple and one or two other rather interesting hues as well! 😀