Oh, What A Disappointment!

I managed to leave work an hour earlier today, and did the usual rush-home-grab-camera-gear-jump-in-car-and-rush-over routine. But as I turned the corner which brought the high-rise into view in the distance, my heart sank – I could see that the high-rise was now painted in rainbow colours. 🙁

Oh well, sniff, let’s see what photos I can get anyway. At least I can stop rushing now… 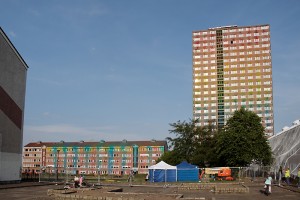 6:35pm Clearly, it’s all over – the crowds have gone home. Only the young kids are left, playing their little games.

I spoke with the two production crew members you can see in the lower right corner here. It turns out that the big explosion of colour on the high-rise block went off at about 5:15pm – just as I was getting on the train to travel home from the city centre. I suppose it’s some consolation that I didn’t just miss the main event.

[Click any of the small photos to see a larger version…] 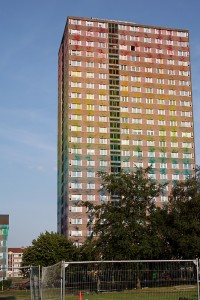 Rainbow high-rise, from the front

6:37pm Here’s a better shot of the main face of the high-rise block. The open window near the top would have had a camera hanging out it – they certainly used this sort of viewpoint on previous days. 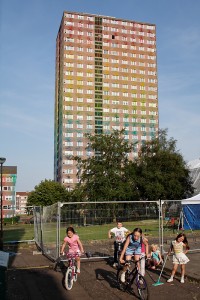 6:39pm I think the young kids were missing the attention they’d previously enjoyed when all the crowds were around – a couple of them became quite chatty. Then the girl on the left asked if I’d take her photo. Partly in the hope that she’d “leave me in peace” if I did (in this day and age, sadly, you have to be careful, as a stranger, talking to young kids…), I agreed. There was an immediate chorus of “me too” from her friends. I directed them to stand in front of the fence here, to get them with the high-rise in the background.

I wish I could take credit for this arrangement of this shot – I took a test shot (which had a poor arrangement) and on hearing the shutter go off they thought that was it and moved away from their poses. I took this shot about a second later and it turned out to be quite a dynamic pose! I’m only sorry that one of the kids was almost totally hidden behind the centre-forward girl. They seemed quite taken with the idea that their picture might appear “on the internet”. 🙂 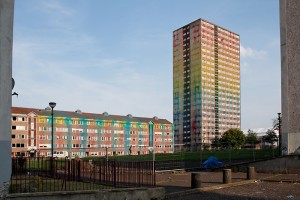 6:43pm Leaving the kids behind, I circled around the area and found this angle which shows both buildings. 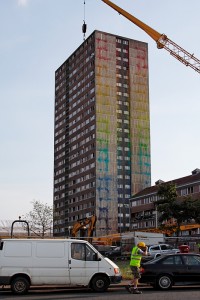 Rainbow block, from behind

6:51pm I then wandered around the back for this shot. 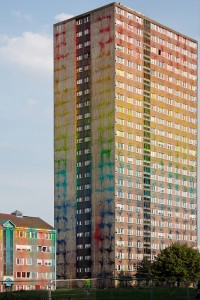 6:57pm Then back around here for this final frame-filler of the main high-rise, clearly showing both faces. 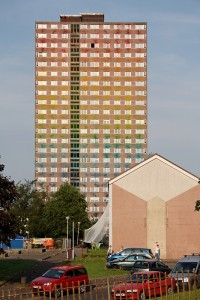 7:06pm Heading back to my car, I glanced back and rather liked this shot which contrasted the “natural” gable end of the still-occupied block on the right with the rainbow block.

Normal life appears to be resuming, with this father taking his kids somewhere. 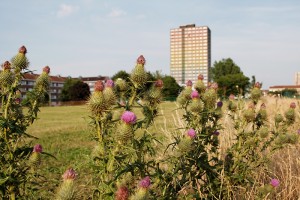 7:10pm Nearly back at the car, I noticed this patch of blooming colourful thistles. The high rise block is scheduled for demolition later on this year or early next year. In a year, it will be gone – but I’ll bet that the thistles will still be here! 🙂

I was told earlier, by a resident, that there was one more big shot to be filmed – an additional area was going to be cordoned off for this final event. However, it was scheduled for Thursday (for those who’ve not been keeping up, this is Tuesday) but not at a specific time. However, I’ve decided that I’m not prepared to rush here after work and find I miss it too – so this is my last set of shots about the making of the Sony Bravia 2006 advert.

To wrap up, here are a selection of other web sites which show alternative photo sets.

With the exception of Carol’s site, these are all still shots, but some people did manage to get video footage.

If you’d like to find other sites, simply Google for them – you’ll get plenty of hits…