I had been wanting to get out for a run in the car and HS were running a membership drive this weekend. Having recently joined NTS, I thought I should probably join HS too and looked for an interesting site first my visit.

I hadn’t heard of the castle before, but it looked like an interesting afternoon out – and not too far from home. The weather was overcast and when I set out there was a little rain in the air. However, the rain never came to anything and the drive to the castle through the Clyde Valley was very pleasant.

The final approach to the castle is along about half a mile of single track road. When you arrive at the end of this road, there’s a small visitor car park. From here, you descend the final short distance to the outer gate of the castle complex. Once you’ve bought your entrance ticket, you can proceed to the outer courtyard. This is now mainly a large grassy lawn (you’ll be able to see this when you come to the final photo in this group). Crossing the outer courtyard, you reach the large ditch which separated the outer courtyard from the inner. 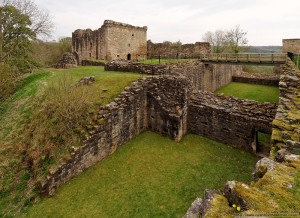 This first photograph shows a view along the defensive ditch and across to the inner courtyard, along with the main feature of the castle – the Tower House. The wooden bridge you can see over the ditch here is of modern construction – the original bridge was located much nearer the location from which this photo was taken. The stone “wall” which can be seen supporting the far end of the bridge is all that remains of the original west rampart which it is believed originally stood as tall as the Tower House it protected behind it: that’s about 30 feet or so.

[Click any off these small images to see larger versions.] 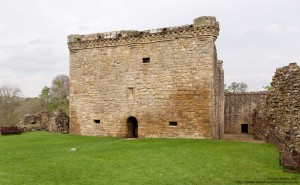 Close-up of the Tower House

This shot is taken from the inner courtyard and features the Tower House in close-up. Note the period garden furniture (lower right) from MFI: Medieval Furniture Inc. 😉 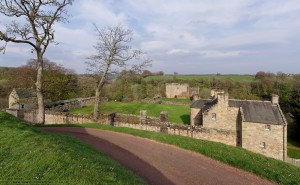 Finally, this is the entire complex, as seen from the edge of the car-park. Returning to the car, the sun had now broken through the cloud cover…

Andrew Hay, a Covenanter and subsequent owner of the castle, built the house seen at the near right corner of the outer courtyard in the early 1660’s.

It is widely thought that Craignethan Castle was, at least in part, the inspiration for Tillietudlem Castle in Sir Walter Scott‘s novel “The Tale of Old Mortality”. This was apparently denied in a letter from Sir Walter, but that didn’t end the speculation. There is a nearby hamlet which goes by the name of Tillietudlem and a nearby halt on a branch railway line was named “Tillietudlem Station” in its honour. Sadly though, the line on which this station sat was closed in 1968 and the buildings have, like the castle, fallen into ruin.