View over Glasgow from Queen’s Park

I thought I should follow up the last post (which was a review of my new Lumix DMC-G1) with a shot from my initial outing with my new camera.  So this is from December 2008.  Ahem…

I went to Queen’s Park and walked up to the top of the park.  For those who don’t know the park, it surrounds a hill on top of which is a flagpole.  There’s a paved viewing area around the flagpole and, on good days, you can enjoy extensive views over much of Glasgow.  This was a bright, wintery day, so conditions were ideal. 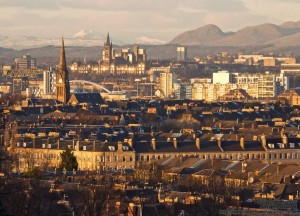 This shot was taken about 30 minutes before the sun set, so the sun was low in the sky – hence the golden colour to the light.  We’re looking slightly west of north here.  (Think of it as about 11:00 on a clock face…)

[Click the small photo to see a larger version…]

You can see a number of landmarks – some famous, some less well known. Working from the foreground back, the ones I’ve identified are as follows: