The View From My Kitchen Window

It snowed through the night last night. I mean, it really snowed last night. 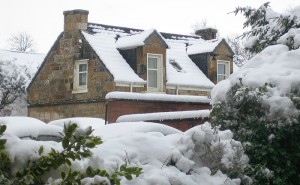 The view from my kitchen window

We don’t often get much snow in Glasgow in the winter and when we do, it doesn’t normally last for long – in fact, it tends to be a bit of a novelty. Well, for the first day or two anyway. 🙂

A thick layer of snow covered everything when I finally got up this morning. This was the view at lunchtime today from my kitchen window. What made this fall of snow stand out was not so much the amount of snow which fell, but the fact that it fell in mid-March!

[Click on the image above to see a larger version…]

This entry was posted in IXUS 40, Photographs, Scotland and tagged Glasgow, snow. Bookmark the permalink.

One Response to The View From My Kitchen Window