After a closure of three years and a refurbishment bill of not far off £30 million, the Kelvingrove Art Gallery and Museum has reopened its doors to huge crowds.

2002 was the last year that Kelvingrove opened in July and the average weekly figures were 28,000 visitors per week. It reopened on Tuesday 11th July, 2006 and in the first week over 141,000 visitors walked through the doors. I was there on the Saturday – though they wouldn’t tell me my number! 🙂

The weather was very warm and sunny – and the place was heaving!

Rather than drive around endlessly, trying to find a place to park my car, I used public transport. From the city centre, I got one of the numerous buses which goes out past Kelvingrove. I got off a short distance before I reached Kelvingrove since I wanted to make the final approach on foot (anticipating that there might be a decent photo). What a grand way to approach the building on such a day as this! 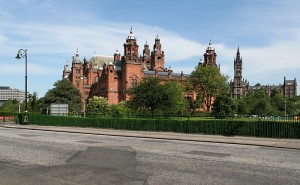 Kelvingrove, approached from the east

This shot shows the approach to Kelvingrove from the east and we see the building almost end on. The Argyle Street entrance is reached at the left. (The darker brown building in the background on the right is the Main Building of Glasgow University.) 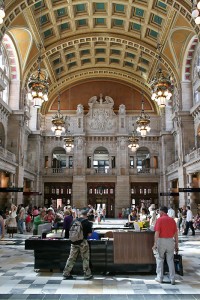 This shot is taken from just inside the front door, looking towards the Argyle Street (rear) entrance. 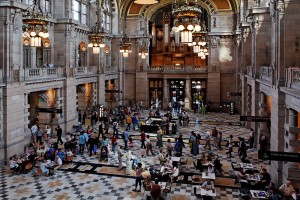 Centre Hall, looking down on the main entrance

The shot to the right is taken from the first floor at the Argyle Street entrance, looking towards the front entrance. If you look closely, you might see me taking the previous photo! 🙂 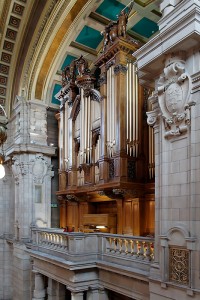 This shot shows better detail on the organ, which you can see at the rear in the previous photo. Note also the detail on the stonework – this sort of carving is repeated throughout the building. The ornamental metal grill in the lower right of this photo, one of many, was part of the original heating system for the building. Organ concerts are performed every so often – contact Kelvingrove for more details. 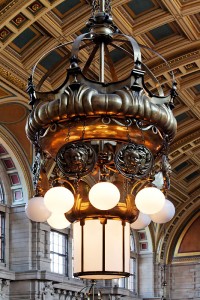 The final photo in this section shows a close-up of one of the enormous light fittings in the Centre Hall. The formal name for this fitting is a “pendant luminaire”. To see them in context, please refer back to either the first or second shots on this page.

Note that even although the building has only been open for less than a week at this stage, several bulbs have already expired! 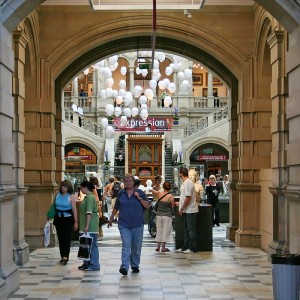 Approaching the East Court from the Centre Hall

Moving through to the East Court, where the theme is “Expression”, the dominant feature must surely be the floating white heads. They can be seen from the Centre Hall, as you can see in the first image here. 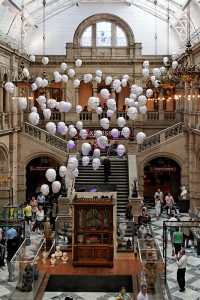 The East Court looks like this, when viewed from level one. I was reminded of Toronto’s Eaton Center’s flock of Canada Geese. 🙂 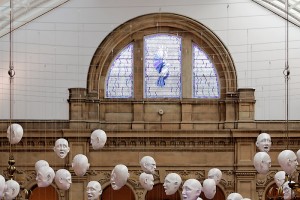 This shot, taken from the same position, shows some of the heads and the window at the end of the East Court. 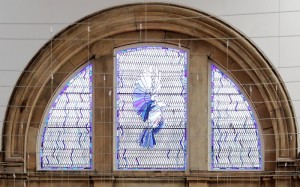 From this same photo, I have extracted the window to show the detail in the stained glass. The main feature is clearly a bird of some sort, but I don’t recall seeing any reference to it anywhere. 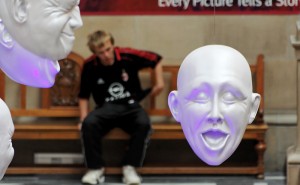 “Every Picture Tells A Story”

Finally, for this section, here are a couple of close-up shots of the faces. Again, these two photos are taken from the same viewpoint as all except the first photo on this page. 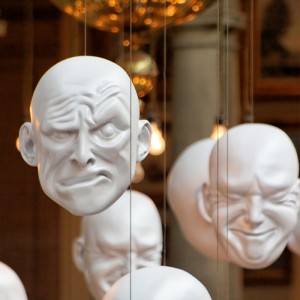 [Don’t forget, you can click on any of the the small photos to see a larger version…]

Moving through to the West Court, where the theme is “Life”, the main feature is “the Glasgow Spitfire” – Spitfire LA198. I’m pretty certain that I have a couple of photos of this Spitfire when it was “gate guardian” at the RAF Leuchars air base in the 1980’s. 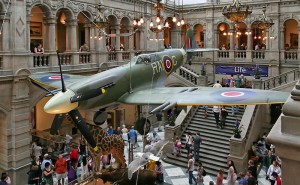 Spitfire LA198 – from the front

The wingspan of 36 feet 11 inches only just fits within the width of the West Court. I’m not sure – does that make the plane seem larger, or the hall smaller? 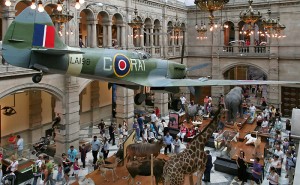 Spitfire LA198 – from the rear

Down below, in the shot to the right, you can see Sir Roger, the Indian elephant. He was one of the few exhibits not to leave the building during renovations. 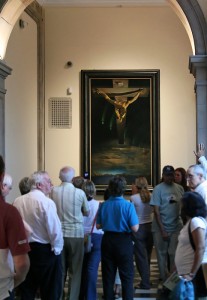 If I have got my bearings correct, the famous Salvador Dalí painting, “Christ Of Saint John Of The Cross“, is in the balcony corridor just behind the viewpoint used to shoot the previous Spitfire shots. There seemed to be a permanent crowd gazing at the painting. For the sharp-eyed amongst you, the painting hasn’t acquired a set of green comets – they’re reflections from lights in the arches in the corridor which stretches behind me. You can see examples on the arch which frames this shot.

I was probably here for ten to fifteen minutes trying to get this shot. Ironically, on more than one occasion I became aware of people who, on approaching from behind and seeing me with camera to eye, paused to allow me to “get my shot” before passing into the frame. Little did they know, that was exactly what I wanted… To those people – thank you for your courtesy!

If you’d like see the picture in more detail, Kelvingrove currently has it available to download as a wallpaper. Instructions on its use are included on the linked page. 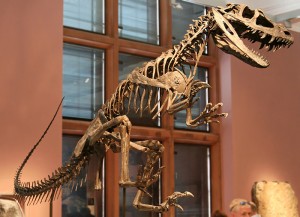 This 4 meter dinosaur skeleton of a Ceratosaur is found in the “Creatures Of The Past” gallery.

“Ceratosaur”: from cerato meaning “horned” and saur meaning “reptile” – but you knew that already, didn’t you? 😉

This pose reminded me of “someone”. I had to think about it for a little while. In the end, I decided that this pose reminds me of Calvin’s tiger pal Hobbes. I can imagine him bouncing around, just for the sheer joy of being alive. Or in his case, more likely, pretending to a dinosaur and scaring everyone. If you’re unfamiliar with Calvin And Hobbes then I’m afraid you’re just going to have to take my word for it.

I arrived at a little after 11am. One sore back and two sore feet later, I finally left a bit after 4pm – and I still hadn’t viewed the upstairs galleries! (I did wander around the balcony corridors, but I was looking at the exhibits in the corridors themselves or looking down to the spaces below.) I’ll need to return to see the upper galleries. 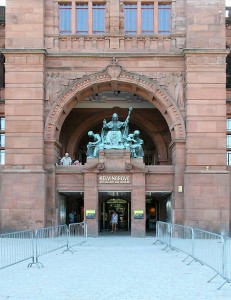 This penultimate shot shows the new lower ground floor entrance at the front. The original front entrance is still in use – it’s just behind the statue of Saint Mungo and stairs lead up to it from either side. 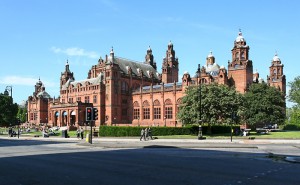 This shot is taken from a similar position to the opening photo in this set but shows the Argyle Street side in more detail this time. (I couldn’t have taken this shot earlier since much of the face of the building was in shade, due to the angle of the sun at that time.)

By and large, I enjoyed this first return visit a lot. In spite of the huge crowds, the building didn’t feel too busy, though it would almost certainly have been a different story on the day of the grand (re)opening earlier in the week. (The crowd control barriers in the photo of the Main Entrance, second from last, were there for a good reason!)

I recall noticing at least one smallish area downstairs which was not yet open. The other related minor niggle I left with was that a number of the exhibits were unlabelled. For example, a number of the sculptures on show in the East Court (below the floating white heads) had no labels I could spot to explain who or what they represented. I’m going to give the Kelvingrove staff the benefit of the doubt, for now, and assume that when I make my next visit that there will be many fewer missing labels. Given the enormous scale of the work involved, this really is a minor complaint.

As a Glaswegian, I’m delighted and proud that it’s open again. If you’re a local, leave it for a few weeks to settle down. Give the staff a chance to do their final snagging to catch “the little things”. If you’re visiting Glasgow just now and you want to see Kelvingrove – go for it anyway!

To all who have been involved with the restoration project – I salute you!

One Response to Kelvingrove Art Gallery and Museum – It’s Back!