What could all this mean?

Sony are in Glasgow to film the sequel(!) to their 2005 Bravia advert – the one which had all the colourful rubber balls bouncing down the streets of San Francisco. I had seen the advert on television last year, but hadn’t really paid it much attention. Reviewing it on the web site reveals an impressive piece of filming and editing.

The Evening Times “leaked” the location of the forthcoming filming late this afternoon. I had known for a few days that something was going on – a friend of mine is one of three local bloggers who have been invited to view events from behind the scenes tomorrow. Although she was obliged to sign a non-disclosure agreement (ie she was not allowed to talk about it), she was still, at this stage, in the dark about what was going on and where it was happening. The official web site had a couple of teaser articles, but they weren’t giving away the location, claiming concerns for public safety – on account of the explosives they were going to be using! When the newspaper published a lot more information than Carol already knew, I was able to take full advantage of it. 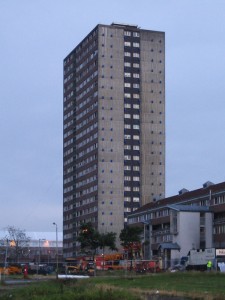 9:55pm I had a prior arrangement earlier this evening. Consequently, it was late before I was able to come along and scout out the site, ahead of tomorrow’s action. The light was definitely beginning to fade by the time I got there, but I took a couple of photos anyway.

As you can see, there’s not much going on.

Hmm – what are all those blue things hanging on the narrow north face of the building?

[Click on either small photo to see a larger version…] 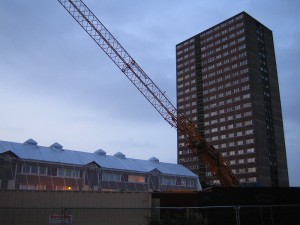 View from the south-west

(Carol managed to get along earlier in the evening – her photos are here.)