After yesterday’s anti-climax at the site of the filming of the new Sony advert for their Bravia brand, I had decided not to bother going back today and, instead, just spend a lazy day in the flat. Then, at about 5:15, my phone rang… It was Carol, calling from the site, saying that she thought it would be worth while coming over after all… The weather was sunny out, so I had little choice – well, what would you have done? I grabbed my stuff and drove over to the site as quick as I could safely manage… 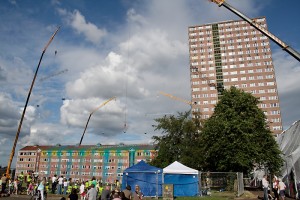 Crowd waiting, while preparations are carried out

6:11pm After being disappointed with my position yesterday, I started off here. This looked as if it would give me a good position to see the action. Fortunately, they haven’t set of the big effect of “painting” the high-rise block yet. And look! Many more buckets have been added to the main face – if you recall, there was only a solitary bucket in the top right corner yesterday afternoon.

You can see from the low-rise block that they have carried out more afternoon work (again) – the yellow stripes you can see here weren’t there when I left yesterday. 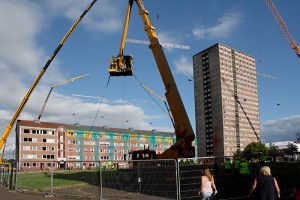 6:18pm Okay – so I decided that this might provide a better angle on the main block when the big one went up, as well as the more obvious aerial explosions which we can see hanging from the booms.

6:19pm “I wish I had their viewpoint! Mind you, one of them has just put on a clear protective ‘raincoat’. And the wind is blowing across the grass towards me…” 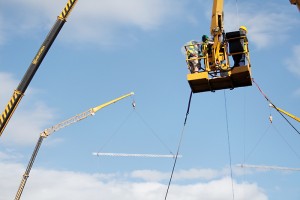 At this point, I realised that the wind would very probably blow the falling paint spray right into this corner I was now in. I was very carefully planning my escape while waiting – there was a corner just behind me which I was going to race behind as soon as I had got my shots.

And then a nearby policemen received orders over his walkie-talkie to clear spectators from the corner. I presume that someone else official realised the risk we were at from drifting paint spray. Maybe I’ll be able to to find Carol when I go back round… 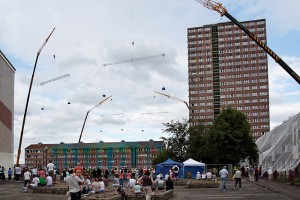 Back where I started, in the main square

6:29pm It’s a little busier, but there’s still no sign of Carol. Is it my imagination or is the sky clouding over? 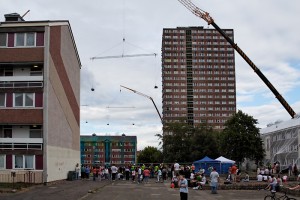 At the other side of the square

I’ve moved over to this side in case they fire off the buckets on the narrow face of the high-rise block – this angle will give me both the aerial buckets and a partial view of the end-face buckets. (Since I don’t know what the specific plans are, I’m having to try to anticipate what might happen…) 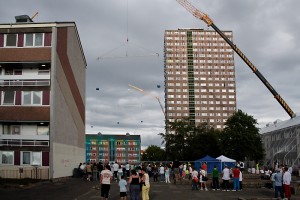 6:55pm I’m bored! While, as you can see, it has definitely clouded over, that’s not true for the sky behind us here. The sun is dropping lower in the sky behind and popping through gaps in the clouds. You can see the shadow being cast on the high-rise by the crane at the right. What are they waiting for? People want to know!

7:06pm Hmm – this is much better. It’s halfway between the corner that I was shifted from and where I ended up. I had gone round the back way and never realised this position was so good. And, wouldn’t you know it, Carol was here all along! 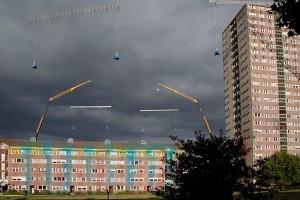 The best location yet

You can see that while the sky has really clouded over ahead of us, while the setting sun behind us is illuminating the scene really well. With those clouds, I can’t imagine they’ll go ahead now… (But, let’s not depart until we’ve heard it officially!) 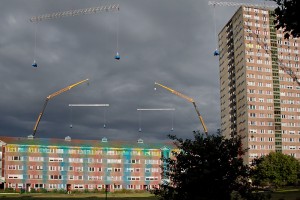 Could this be it – finally? 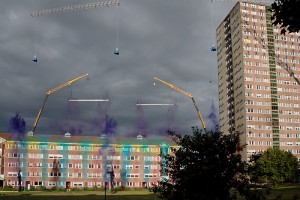 Purple paint, exploding up from the ground 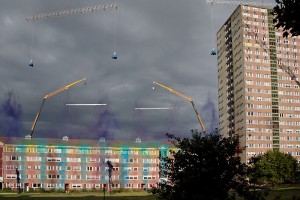 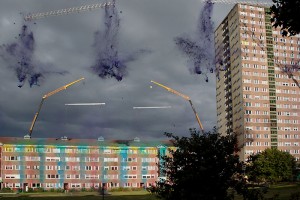 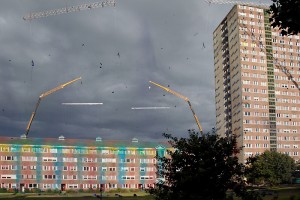 And, this time, in less than six seconds, it was all over!

Eh? Was that it? So much for all the blue buckets I can see on the end of the tower block exploding. Harrumph! Still this was a much better position than I had last night! 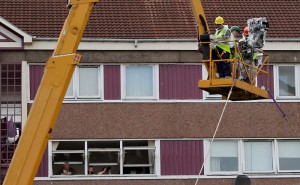 7:12pm There’s those guys on their crane platform that I was standing below almost an hour ago. You can see that they and their gear are fully wrapped in clear plastic macs.

If you look closely at the window in the background, you’ll see one of the spectators has what appears to be an SLR camera up to their face. After doing some detective work, I’m fairly sure that this person must be “Briggaitman” in his perch, the photographer responsible for this rather impressive collection of shots at Flickr. Mind you, with his viewpoint, you’d expect a pretty good set. If this isn’t Briggaitman, then I think that Briggaitman has stepped out the room for a moment and left his camera lying… 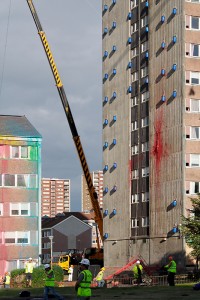 7:14pm This final shot for tonight shows the base of the narrow end of the high-rise block. That big red splat must have been fired off earlier today – I’ll bet it would have been impressive.

Here are the photos Carol got today. She also had her camcorder on a tripod and managed to video one of the barrel clusters exploding. I’d like to assure you that the female voice heard just after the explosion is not Carol!

I wonder what we’ll get tomorrow?