Did I just say “walked”? Hah! Make that “squelched”! Every single soggy step. Fortunately, I was wearing reasonable hiking boots, but even at that, I still had to be careful to avoid getting wet feet. Next time I think I’ll wear my wellies! (There’s a lovely quote about the moor halfway down this page: Geographers will tell you that Rannoch Moor is drained both into the Atlantic, by way of Glen Orchy and Loch Etive, and into the North Sea, by way of Loch Rannoch and the River Tay. This is not quite true – as someone who has walked across it several times, I can assure you most of it isn’t drained at all!) 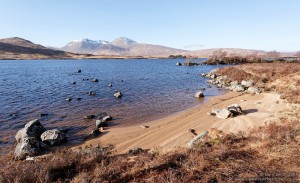 In planning the trip, I had anticipated wintery scenes – it is, after all, only the third day of February. Instead, this could be a pleasant summer day we’re looking at here. A possible picnic location. But there was a cold wind. Brrr…

Some of you will be familiar with the expression “take nothing but photographs, leave nothing but footprints” and might be wondering if I obliged and left my mark on the sand. I didn’t – I skirted the beach by squelching around the raised ground. I felt it would have been sacrilege to desecrate the wild beauty of the scene. 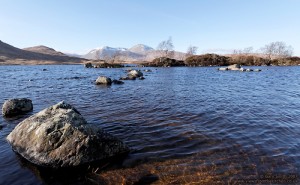 This second shot is taken from a little further on round to the right from the previous shot.

For the final shot in this set, I returned to the car and drove on to the other side of the moor. Now you’re on the approach to the famous Pass of Glen Coe. This was taken across the road from a parking spot just beyond Altnafeadh which, in its turn, is about three miles beyond the Kings House Hotel. This is the view looking back approximately east. The road is on the right hand side here and is only just cropped out the final image. 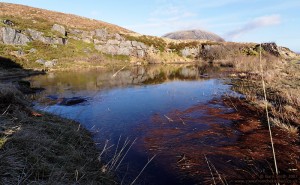 If you look closely, you can see a thin layer of ice over most of the pond’s surface.

Footnote After this leaving this location, I stopped briefly along the Pass of Glen Coe, but the light was unsuitable for decent photographs due to the position of the sun in the sky at the time. After that, it was back on the road for the final short drive to the Ballachulish Visitor Centre to get something hot to eat. I’ve stopped there before and I enjoyed my snack this time – a bowl of soup, followed by coffee and a bit of their home-baking – as much as I did the last time. If you’re going to give them a visit based on my recommendation, try not to leave it too close to closing time – I suspect that they’ll not have much fresh produce left and you might be disappointed.

Update Exactly one week later, three of the guys from the Scottish PhotoBloggers arranged a trip up to the same area. They got the “proper” wintery weather (huh! 🙂 ) and produced images such as this one from Phil at Mr Zero and this one from Paul at Kulay Photography. (Navigate back and forward in their sites to see several other results from the same day.)