Alloway’s auld haunted kirk was the location of the demonic gathering of witches in Robert Burns’ classic poem “Tam o’ Shanter”. For those of you who might be unfamiliar with the story which was first published in 1791, here’s a summary of the opening verses, just to set the scene…

Having spent the evening carousing in congenial company in a warm, dry inn, our hero Tam finally sets out reluctantly into the wild, stormy night to go home, to his wife. (Where sits our sulky sullen dame. Gathering her brows like gathering storm. Nursing her wrath to keep it warm.)

Knowing the journey home through wind and rain to be dangerous, he keeps his eyes open for supernatural peril. (Whiles glowring round wi’ prudent cares, lest bogles catch him unawares.) On the way, he has to pass the old church (the auld kirk) in Alloway, whare ghaists and houlets nightly cry. As he draws near, he sees the place is ablaze with light (Kirk-Alloway seem’d in a bleeze). Not only that, it seems that there’s some sort of a shindig in progress (and loud resounded mirth and dancing). Emboldened by his inebriated state, he urges his horse, his gray mare, Meg, onward to get a closer look…

Although Burns doesn’t specify a date for the story, it seems fair to recount the events today – on Hallowe’en. 😯 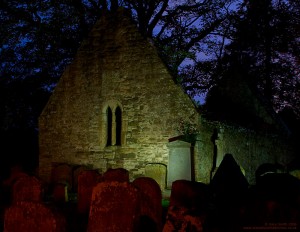 I visited the scene a shade over two years ago and got the following atmospheric shot as dusk fell. While the council had seen fit to install some external lighting, there was no sign of the warlocks and witches in a dance witnessed by Tam… Still, I did manage to get this spooky photo of the ruined church.

It’s true that I’ve taken a slight liberty with the saturation of the deliciously blood-red gravestones in the foreground. However, there was a distinct colour cast from the street lights which were shining over my shoulder – I only had to give it a slight boost!

I’ve not been back in the two years since this photo was taken. I understand that considerable renovation of the property has taken place since then. The First Minister, Alex Salmond, officially reopened the site in April 2008.

If you’re interested in finding out more about the poem and its background, you can read about it here – including a summary of the poem, while the full poem is listed here.

This archive photo from the Royal Commission on the Ancient and Historical Monuments of Scotland, taken in 1900, shows that little has changed in the past century.

Alloway’s replacement for the auld kirk opened 150 years ago. It still seems to be going strong and, amongst other things, their web site has some additional historical background information.